As you probably already know, Grenson’s mum doesn’t only spend her days making delicious meatloaf for his dinner and smothering him with kisses, oh no; she also finds the time to be a super successful fashion journalist whilst also being the flat shoe blogging sensation, En Brogue. As a result, most weeks she can be found heading off up west to meet up with other fashionistas to assess the latest trends, and basically just swank around town looking grand (apparently it’s all in the name of research?!).

On one such occasion recently, I decided enough was enough, it was high time that Grenson and I got in on this game too.

From the look on Grenson’s face in this picture you can tell that he wasn’t entirely happy with the idea. For a start, it meant we had to go on a train (which he’s not too keen on) and secondly, I had neglected to put him in his fanciest coat! ‘Really darling how do you expect me to socialise with the fashion crowd without my best clobber on?’

So after a few appointments, including one that Grenson and I had been personally invited  to (see we’re cool too!), for a look at White Stuff’s new SS17 collection which I can confirm is very nice indeed, it was decided that we’d stop for lunch and then take a walk around Regent’s Park whilst En Brogue finished off the rest of her ‘to do’ list.

But where should we go for lunch? There is of course a wealth of choice in the big city. Luckily for us, we managed to stumble across a place that happened to be described as “the best restaurant in the world” by Giles Coren, no less (if their website is to be believed).

We bagged a table outside as the weather was unseasonably mild and waited for a menu that I expected to consist entirely of haggis and battered chocolate bars.

What a fool I was! I hadn’t realised that I’d accidentally entered a meat nirvana. There was even a burger on the menu that had been voted the ‘Best Burger in the UK 2016’ at the National Burger Awards!! (yes I know! I didn’t know that was a thing now either)

It’s fair to say that if you’re a veggie, this may not be the best place for you to visit. If, however, you’re the type of person that appreciates dishes such as ‘bread & dripping’, ‘venison chateaubriand’ and ‘dirty buttery mash’, and you also appreciate knowing not only where your meat has been farmed, but also who butchered it and even who shot it, then you’ve come to the right place.

The meatiness shouldn’t be a surprise; the guy who founded this place, Andy Waugh, is the son of a venison butcher, hence the concentration on fine wild venison dishes. A lot of us Brits have never tried wild venison and I have to admit that the thought of hunting those magnificent beasts may have put me off in the past. But this isn’t some trophy hunter wanting to feel big by shooting  a defenceless animal and posing for photos. If you read Andy’s blog on the Mac and Wild website, you realise that this is all done ethically, based on a yearly cull to keep numbers manageable and healthy for themselves and the environment. Also, if we don’t eat it then the Norwegians and Dutch will, as they currently buy up nearly all of it.

As already mentioned, the award winning ‘Veni-Moo burger’ had immediately caught my eye, so I ordered that along with cheesy chips and a Brewgooder Clean Water Lager, which is a craft beer that donates 100% of its profits to clean water projects around the world (so you can get drunk and do your bit for charity at the same time! Bonus!).

You could really understand why this burger was award winning. But to be honest, I’d also give those fries and the cheesy dip an award too…Nobel Peace maybe?!

I hadn’t thought of it as we had enjoyed our mighty fine bounty sitting outside, but while writing this post I became a little worried that dogs may not have been allowed indoors. This would have been a disaster as I aim to try not to include anywhere on here that you can only enjoy with your pooch if the weather allows, and having to leave out this place would have been a travesty. Luckily, they confirmed via email that small dogs are indeed allowed indoors (it is, after all, a very small indoors, so a Mastiff for instance may actually fill the place!). I shouldn’t have really worried, as there were telltale signs that the place was a fan of our four-legged friends – mainly the door stop. 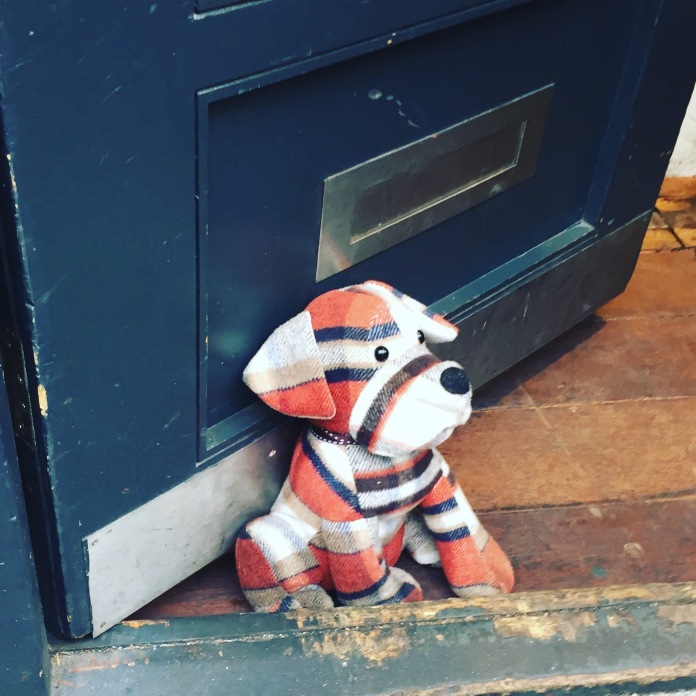 So there you go. If you find yourself on a fashionable day out in central London and in need of an award winning Scottish meal, then look no further. And I suppose if you do have a dog that couldn’t accurately be described as ‘small’ you could always follow our example and sit outside. They did seem to have blankets on offer and there are outside heaters. If all else fails you could warm yourself up with a whisky, and where better to do that than in a Scottish restaurant?!