For any of you planning on becoming regular readers of this blog, be prepared to become accustomed to frequent posts featuring the Isle of Wight. This is down to the fact that my wife Hannah – a.k.a En Brogue – is a ‘Caulkhead’, (that’s what islanders call themselves…actually I think there are strict rules about its use that may require birth certificates of parents to be produced if you attempt to use it in public, but I’m going with it anyway), so we spend a lot of our time down on ‘The Island’ (and if you want to avoid annoying the locals it’s ‘on the island’ not ‘in the island’, En Brogue can get very irate about that one!).

Christmas this year was Grenson’s first visit to The Island, and also coincided with him finally being allowed out for walks; it is no understatement to say that he thought all of his Christmases had come at once!

I was also pretty happy as it meant that Man About a Dog blog could start reviewing some of the many fine Island establishments that I have grown to love over the twenty years I have been visiting. And this first post features one of my very favourites – The Dell Cafe. 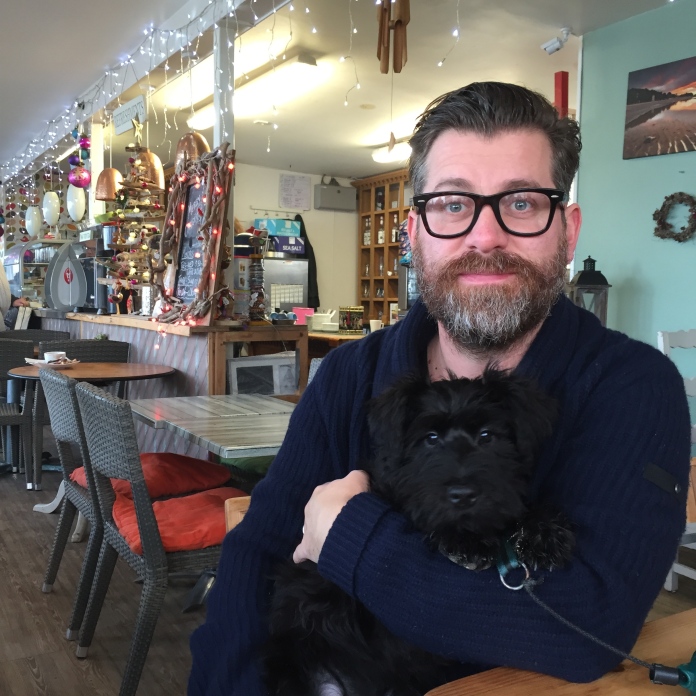 Dell Cafe is located at the end of Appley Beach which, when the tide is out, has a mile-long sandbank that Grenson has decided to claim as his own, judging by the barking he did at every other dog walking there. It is run by a fantastic young couple, Ali and Jason, and their equally young and cool staff. During the winter season it draws dog walkers, cyclists and ramblers from miles around who take a break from the bracing Solent air to refuel on steaming cups of coffee and hot sandwiches. In the summer season it is full all day long with sandy holidaymakers sitting outside soaking up the sun and cooling off with an iced lolly/beer.

Did I also mention that they do a mean breakfast?

On most Sunday afternoons during the summer you’ll find one of the many talented young Island musicians playing a laid back acoustic set outside, making it almost impossible to rouse yourself into heading back to ‘the mainland’. However, my very favourite time of the year is high summer when Dell runs evening tapas nights – dishes I always order include the battered squid that tastes like it’s got KFC coating on it (in a really good way!) and the black pudding with pomegranate. Too many times to count I have droned on at friends about the fact that if we’d travelled for hours on a plane to some trendy Mediterranean hotspot and managed to stumble upon an amazing little cafe such as this, we’d have come home and raved about the place to anyone and everyone that would listen. And yet all it’s taken is a 15 minute catamaran journey from Portsmouth to get to The Dell and soak in spectacular views like this.

So here I am, this is me, back from another lovely trip to Dell Cafe and raving on about it to anyone and everyone who will listen.